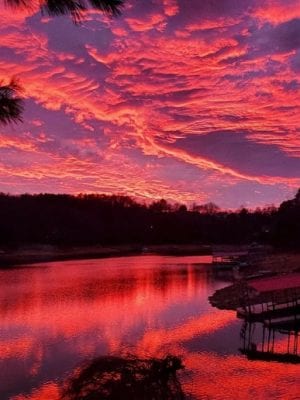 HIAWASSEE, Ga. – The brilliant, blazing sunset, Monday, Feb. 3, triggered a flood of photographs to appear on social media from residents of Towns County and surrounding areas which witnessed the amazing sight. Many speculated on the phenomena, sharing what they believed the evening sky foretold.

The magnificent image shown above was captured by Celina Stephens near Pat Colwell Bridge in Union County, GA. Stephens said that filters were not used to alter the photograph, which was taken from her cellular phone.

“Red sky at night, sailor’s delight. Red sky in morning, sailor’s warning” is a rhyme that has been passed down for generations, but is there any truth to the proverb? 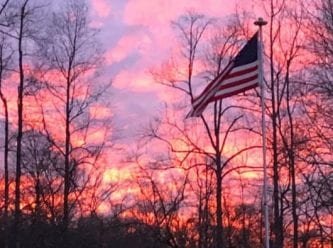 “Weather lore concerning the appearance of the sky, the conditions of the atmosphere, the type or movement of the clouds, and the direction of the winds may have a scientific basis and likely can predict the weather,” the Library of Congress explains. “In order to understand why “Red sky at night, sailor’s delight. Red sky in morning, sailor’s warning” can predict the weather, we must understand more about weather and the colors in the sky. Usually, weather moves from west to east. In the mid-latitudes, the prevailing winds are westerlies. This means storm systems generally move in from the west.

“The colors we see in the sky are due to the rays of sunlight being split into colors of the spectrum as they pass through the atmosphere and ricochet off the water vapor and particles in the atmosphere. The amounts of water vapor and dust particles in the atmosphere are good indicators of weather conditions. When we see a red sky at night, this means that the setting sun is sending its light through a high concentration of dust particles. This usually indicates high pressure and stable air coming in from the west. Basically good weather will follow.”

The adage holds a much older truth for many residents of Appalachia, however, whose ancestors relied on the sky’s signs as a means of survival. According to biblical scripture, Jesus said, “When in evening, ye say, it will be fair weather: For the sky is red. And in the morning, it will be foul weather today; for the sky is red and lowering.”

While the weather in our mountain region is often unpredictable, the morning following the breathtaking sunset indeed proved calm.