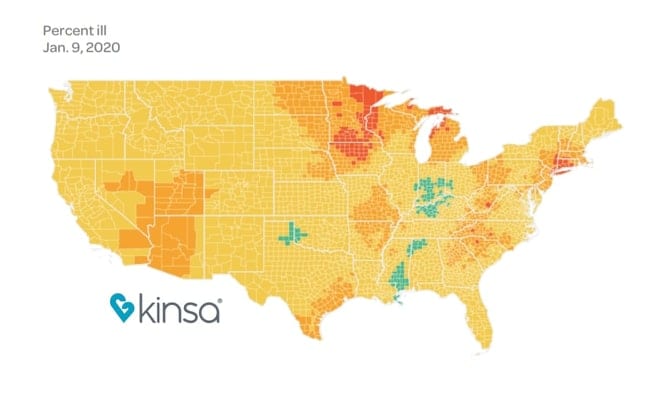 HIAWASSEE, Ga. – FYN, along with several Atlanta-based media outlets, recently reported that Towns County ranked #1 in the state of Georgia for influenza symptoms, with 8.68% of the population experiencing sickness. As of Jan. 9, Kensa Health reported Connecticut – rather than Georgia – as the sickest state, with 5.17% of the population experiencing symptoms in the New England state. According to the flu-tracking research group cited in the study, Georgia has since decreased to 3.86%, ranking 25th in the nation. 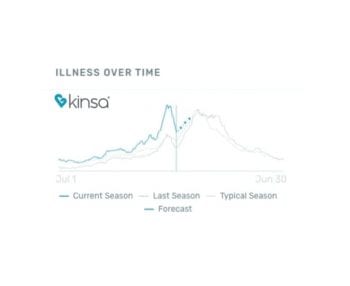 The percentages continue to fluctuate as the virus spreads, however, as influenza transmits from person-to-person.
“Kinsa provides the earliest and most geographically-precise information on where and when influenza-like illness is spreading,” Nita Nehru of Kensa Health told FYN. “Through our communication network that connects nearly two million users with an app, email and text alerts and a best-selling smart thermometer, Kinsa aggregates 40,000 temperature readings and 25,000 symptom inputs daily to create an accurate picture in real-time of where illness is starting, how fast it is spreading and how severe it is.”
Towns County, and Georgia as a whole, are not in the clear just yet, and health professionals continue to urge the public to receive the influenza vaccine. According to state health officials, 15 people have died and 505 people have been hospitalized due to the flu virus.
“The predominant flu virus circulating is a B/Victoria strain that doesn’t usually pop up until the end of the flu season, in early spring. B viruses can infect anyone, but they generally strike children and young adults more than the elderly,” the Georgia Department of Public Health reported.
It is recommended that influenza sufferers avoid contact with the public for at least 24 hours after their fever breaks and their body temperature returns to normal.
Influenza