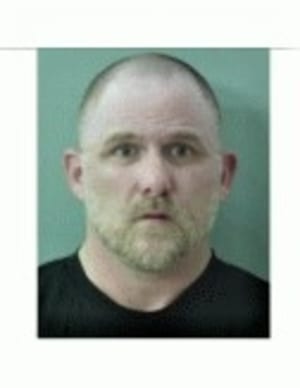 HIAWASSEE, Ga. – A recent traffic stop led to the arrest of a Blairsville man on multiple charges  An officer with Hiawassee Police Department conducted a stop on a 1999 Buick Intrique for alleged improper lighting equipment on North Main Street, Dec. 9. Upon initial investigation, it was determined that the driver of the vehicle did not possess a valid driver’s license.

After the driver, identified as Steven Michael Hildebrant, 40, of Blairsville, was taken into custody for the license violation, the arresting officer reported locating two small baggies containing a white powdery substance within the vehicle. According to the police report obtained by FYN, a residue field-test indicated a positive presence of methamphetamine.

Additionally located in Hildebrant’s vehicle was an alleged loaded 9 millimeter handgun. Hildebrant was subsequently charged with Firearm Possession by a Convicted Felon and Possession of a Firearm during the Commission of a Crime.

Hildebrant was transported by a Towns County Sheriff’s Office deputy to the county detention where a third baggy containing a white substance was purported as discovered on the subject’s person. Hildebrant was further charged with crossing a county guardline while in possession of an illicit substance. The suspect was additionally charged by Hiawassee Police Department with driving with an obsure tag, improper use of the central turn lane, and possession of less than an ounce of marijuana.

The case will be forwarded to Enotah Circuit District Attorney’s Office for prosecution. Hildebrant is presumed innocent until proven guilty in a court of law.