HIAWASSEE, Ga. – Georgia is experiencing a notable spike in influenza cases this season, and Towns County is not immune from the dreaded virus as confirmed reports continue to rise throughout the region. The Georgia Department of Public Health (DPH) rated the current level of statewide contagion as “widespread,” urging citizens to take precautions.

During week 48, 5.85% of patient visits reported through the U.S. Outpatient Influenza-like Illness Surveillance Network were due to influenza-like illness. The percentage is above the regional baseline of 2.4%. According to the Center for Disease Control, Georgia increased from “regional”  to “widespread” transmission between week 47 and week 48, which lists the current statistics. 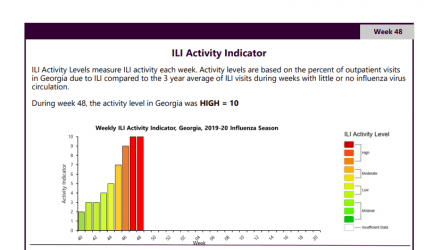 As of Nov. 30., the influenza rate in Georgia was considered “widespread” by the DPH.

“The flu season can be as early as October and as late as May,” DPH said. “During an average flu season, 36,000 Americans die and more than 200,000 are hospitalized because of complications from influenza. Some people, such as young children, the elderly, pregnant women and people with certain chronic health conditions are more likely to have complications related to influenza. While most deaths occur among the elderly and people with chronic health conditions, deaths can also occur among younger adults and children.”

Anyone is susceptible to becoming infected with the influenza virus, DPH explains. During an average flu season, 10 to 20% of people become infected. Influenza readily spreads from person to person when a virus carrier coughs or sneezes. More so, the influenza virus can survive on surfaces outside the human body for hours, and individuals can become infected by transferring the virus to their hands, then rubbing their eyes or nose. Healthy adults can spread the virus from one day before exhibiting symptoms until five days after the onset of ailments, therefore, infected individuals can pass the influenza virus to others prior to experiencing symptoms. Children may shed the virus for a longer period of time than adults.

Flu viruses morph each year, so immunity is not long-term.

It is recommended that influenza sufferers avoid contact with the public for at least 24 hours after their fever breaks and their body temperature returns to normal.

Flu vaccines cause antibodies to develop in the body approximately two weeks after vaccination.

Unlike the common cold, the flu typically occurs with a sudden onset of symptoms. Common signs of influenza infection include:

The flu typically lasts from one to two weeks, with severe symptoms subsiding in two to three days. Weakness, fatigue, dry cough, and a reduced ability to exercise, however, can linger for three to seven days.