YOUNG HARRIS, Ga. – Dozens of grateful citizens, elected officials, and first responders gathered at the Red Cross headquarters on Jack Dayton Circle in Young Harris, Wednesday, Nov. 20, for a surprise dedication in honor of the late Sally Varao, a devoted captain of Towns County’s American Red Cross. The ceremony began shortly after 2 p.m. with the arrival of Varao’s husband, Joe, who was also recognized for his years of service and noticeably touched by the unexpected event. 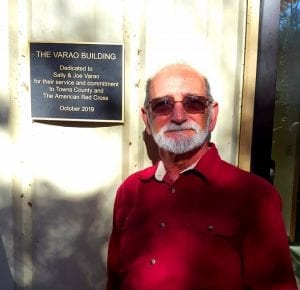 “In this world there’s a lot of special people,” Towns County Commissioner Cliff Bradshaw said. “There’s a lot of people who do a lot of things for other people, but I have never known anybody to be more caring than Sally and Joe Varao, out of all the people I’ve known in my life, always others first. Always…When Ms. Sally passed, I knew as commissioner that we were going to do something for her and Joe, for the memory of her. I didn’t know what and I kept thinking of things,” Commissioner Bradshaw said, settling on a permanent memorial in the form of the Red Cross building dedication.

In addition to serving as the captain of Towns County’s American Red Cross, Sally Varao volunteered as a “Pink Lady” at Chatuge Regional Hospital, served on the board of the Towns County Food Pantry, and lead a team at House of Manna. Ms. Varao relocated to Towns County from California’s bay area two decades ago, passing away in January 2019, following an extended illness.

Joe Varao shared cherished memories and the many virtues of his well-loved spouse after unveiling the inscribed plaque affixed to the county’s Red Cross office.

Laurie Belmares, the daughter of Sally Varao, spoke with FYN, expressing evident appreciation to Towns County for the dedication, describing the event as “humbling” and “touching.”

Bishop Raburne Wilson, the lead pastor at Mt. Zion Church of God of which Ms. Valao was a member, offered a meaningful invocation at the start of the program. Matthew Akins, Regional Preparedness and Partnership Leaser of the American Red Cross, delivered a heartfelt tribute as the ceremony concluded.

“You know, right there at the end, she was making sure all of her plans was done,” Akins said in part. “She had the ladies come in from the food pantry to make sure they knew how to do the paperwork. So she worked to the very end. To say she was committed to her community, as much as she was to her family, well, that’s about the biggest understated statement I’ve ever heard. I miss my friend, each and every day. We all do. But I think she’s right here with us, and I hope we did you proud, both of you proud, like you made all of us proud.” 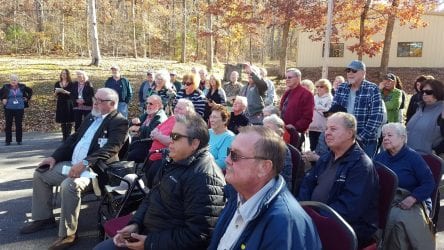 An appreciative crowd attended the dedication for the valued public servants.