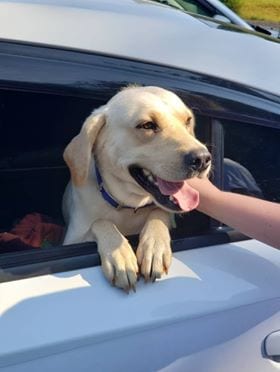 Able, a 40-year veteran canine trainer, told FetchYourNews in May that his goal in forming the organization, in conjuntion with local veternarian Dr. Hilty Burr, was based on the goal of training canines for law enforcement and first responders. The trainer said that it typically takes six-to-eight weeks to train the canines, followed by additional time spent in the field teamed with the handler.

Hiawassee Police Chief Paul Smith spoke fondly of the department’s new addition. Buddy has been assigned to assist Hiawassee Sergeant Tracy James. “Sergeant James has previous experience in canine handling,” Smith said. “He and Buddy have been training for about three weeks now. The dog is alerting on three different drugs. There’s four drugs he has to alert on in order to be certified. There’s marijuana, methamphetamine, cocaine, and heroin. He’s alerting on everything but heroin right now, They just haven’t started on it. He’ll do fine when they introduce that to him. He’s a very smart dog.”

Chief Smith expressed sincere appreciation for Able’s contribution, adding that a dog of Buddy’s caliber would have cost the department roughly $15,000.