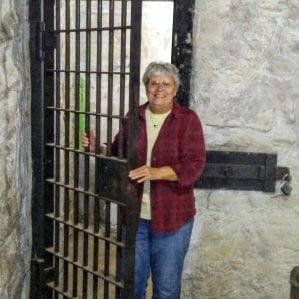 HIAWASSEE, Ga. – The Old Rock Jail Museum will transform into a haunted historical site this Halloween for the second year in a row. Towns County Historical Society President Sandra Green made the announcement at the society’s Sept. 9 meeting.

“We’re going to have a haunted Halloween at the jail, and that’s something that Tyler (Osborn) and Mary Ann (Miller) will be working on,” Green said. “We’re going to revise it a little bit from last year, and it will be new and improved. But we’re also considering charging a dollar for admission and hope that that would be a good moneymaker for the jail. So we’ll be working on that in the weeks to come, and I’m sure as creative as they are that they will come up with some great ideas.” 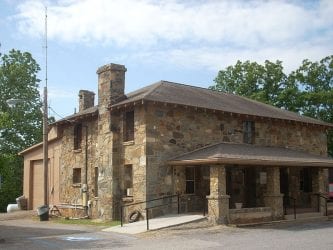 The Old Rock Jail Museum is located next to the Towns County Courthouse.

Members of the local Future Business Leaders of America (FBLA) will assist the historical society officers in shaping the spooky setting. Towns County, in cooperation with the City of Hiawassee, will host its annual Halloween trick-or-treat, costume contest simultaneously.

Additionally, the Old Rock Jail Museum  will once again feature “Picking on the Porch” in early October. In the event of inclement weather, the music will be held indoors at the Towns County Civic Center.

The festivities won’t end with the close of the autumn season, however.

“We’re also doing something new, and I can thank Tyler Osborn, our secretary, for coming up with this idea,” Green shared. “We’re going to have an old-fashion Christmas open house at the jail in December, and we’re going to do that in conjunction with the lighting of the tree on the Square.”

Holiday decor depicting the 1930s and 1940s eras, a time period when the jail was operatable, will be on display.

The Old Rock Jail Museum is currently open for touring Fridays and Saturdays from noon to 4 p.m. Admission is free, although donations are greatly appreciated by the Towns County Historical Society.