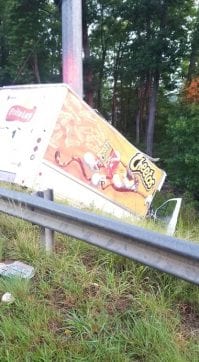 HIAWASSEE, Ga. – An early morning accident claimed the life of a 41 year old male delivery truck driver on State Route 76 near Frog Pond Road, west of Hiawassee city limits. First responders were dispatched to the scene of the single vehicle accident at 6:31 am, Saturday, Aug. 3.

The driver was traveling eastbound, toward Ingles in Hiawassee, when the commercial vehicle crossed the westbound lane of traffic, colliding with a pole. Skid marks were not apparent on the roadway, suggesting that the driver did not appear to brake prior to impact.

The cause of the fatal crash is under investigation by Georgia State Patrol at this time.

UPDATE: The driver of the vehicle was identified as Matthew Eggley of Hayesville, NC.