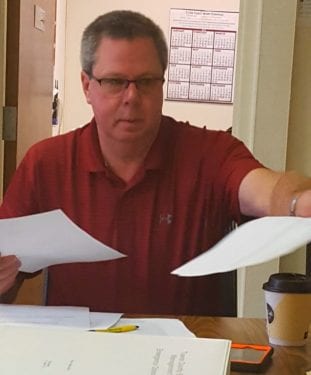 HIAWASSEE, Ga. – Towns County Sole Commissioner Cliff Bradshaw called a special meeting Friday, July 26, to amend the local alcohol mandate, making it simpler for area establishments to understand the terms of agreement. Bradshaw described the previous verbiage on the mandate as “too hard to understand.” The commissioner has worked alongside Towns County Attorney Robb Kiker in past weeks to eliminate the confusion.

The revised ordinance states that due taxes from beer and wine sales are to be paid by the alcohol distributor. A three percent tax acquired from “liquor-by-the-pour” sales are to be collected from the establishment itself.

Commissioner Bradshaw explained that businesses with an alcohol license must provide documentation to support reported sales figures, and that Towns County has the authority to conduct an audit if questions arise. Establishments must serve a 50-50 percent ratio of food to alcohol sales, along with additional requirements, in order to operate in Towns County. License permits are available at the commissioner’s courthouse office. The fee for on-premise beer and wine licenses is fixed at $1,000. A combination license to additionally serve liquor on-premise is set at $3,000. Event permits will cost vendors $25 per day. A charge of $125 is required to alter wording, such as an establishment’s name, on an issued license.

The liquor referendum appeared on the November 2018 ballot, garnering 66.67 percent approval from Towns County voters. After a lengthy process, the original liquor-by-the-pour ordinance was adopted by Towns County during a regular monthly meeting held Tuesday, March 19. To date, Hawg Wild BBQ was the sole establishment to request a liquor license.