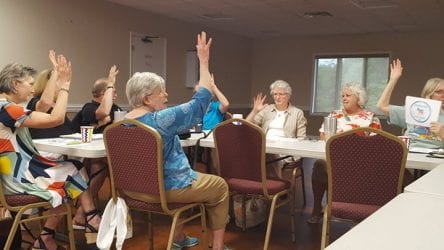 HIAWASSEE, Ga. – Towns County Democratic Party held its July 11 meeting at the Towns County Civic Center to discuss several topics of interest, including plans for an upcoming “Blue Fest” fundraiser to be held in October at Meeks Park in Young Harris. “Our goal should be to register new voters, get shy Democrats active again, and help with fundraising for 2020,” Towns County Democratic Party Secretary Terrylynne Marshall said. A tentative date of Oct. 26 was noted.

The group discussed creating a Facebook presence, and possibly a website to feature content related to the Party. The Democrats voted (feature image) on a logo for representation, and discussed participating in future high school speech contests by mentoring students and raising prize money alongside the Towns County Republican Party who has exclusively hosted the event in past years.

Towns County Democratic Party meets on the second Thursday of each month at 6 pm. Towns County Commissioner Cliff Bradshaw is scheduled to attend the August session, and the group hopes to learn more about the veterans recognition program that the county, in cooperation with the local VFW, recently initiated.