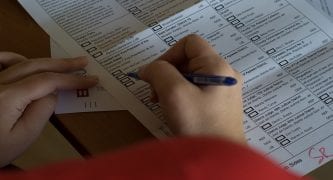 HIAWASSEE, Ga. – As Hiawassee City Council’s three-of-five seats election approaches in November, and national, state, and county offices loom the following year, Towns County Board of Elections may have to scramble to put new procedures into place due to potential changes in voting laws

“We are panicking,” Towns County Elections Director Tonya Nichols told FYN, June 10. “We are hearing nothing about the training or the bidding process. The clock is ticking. It’s disheartening. We don’t know where we stand or what to do.”

Hand-marked ballots could become a reality if challengers of the electronic system succeed in the continuation of the “Fair Fight Action” lawsuit, initiated upon the defeat of 2018 Georgia gubernatorial candidate Stacy Abrams. In recent weeks, a motion to dismiss a lawsuit challenging the use of touchscreen voting terminals was denied by a federal judge. Attorneys for the State of Georgia argued that the lawsuit should be dropped as the Secretary of State’s Office is in the process of selecting a new vendor for voting machines, and widespread changes to election laws were implemented, including a bill signed by Governor Brian Kemp that calls for new voting machines that print paper ballots, extends the time period before registrations are canceled, and places limitations on the closure of voting precincts. U.S. District Judge Amy Totenberg countered that “rapidly evolving cybertechnology changes and challenges have altered the reality now facing electorial voting systems and Georgia’s system in particular,” adding that the motion to dismiss the lawsuit disregarded that fact.

According to the Georgia Secretary of State’s Office, should hand-marked ballots become the future of the voting process, the cost to Georgia taxpayers is estimated in the multimillions. “Implementing hand-marked paper ballots would cost our state more than the estimated $224 million, since that number does not include the costs of staff, training, and other items related to election systems,” Georgia Secretary of State Director of Elections Chris Harvey concluded. “A hand-marked paper ballot system would also dramatically shift costs onto local governments – placing a heavy burden on local taxpayers and drawing a stark distinction between this and other options designed to prioritize taxpayer savings.”

While the Towns County Elections Office anticipates potential reformation, elections’ employees are faced with a host of responsibilties, including processing voter registration applications, preparing advertisements of qualifying requirements, updating voters’ card files, and performing municiple street maintenance, which ensures software data correctly corresponds with the location of voters’ residences, among other duties. “We stay busy as we wait in limbo for what’s to come,” Nichols said.