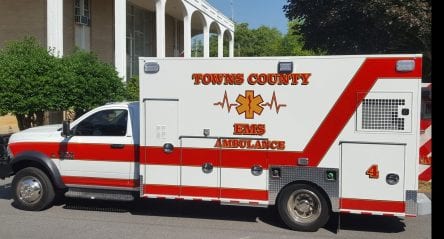 HIAWASSEE, Ga. – Towns County Emergency Medical Services (TCEMS) added a new ambulance to its fleet over the Memorial weekend, an addition that has been in the works since last October. The emergency vehicle will join four other ambulances which serve Towns County, and will be housed at the west station in Young Harris. TCEMS delivered the ambulance from company, Frazer, which submitted the lowest bid from Houston, Tx.

FYN spoke with TCEMS Director Ken Nicholson who called the recent addition “top of the line,” adding that it has less miles, and will be easier to remount when necessary.

The updated module carries twice the capacity than the one it replaced, necessary in the event of a multi-casualty accident, and it is constructed of steel, TCEMS EMT Jim Shirley explained in October. The module features a generator and bright LED lighting, allowing medics to function more efficiently in dimly-lit emergency situations. The cab and chassis of the ambulance was purchased through Jacky Jones dealership. The process of the ambulance becoming operational was expected to take approximately nine months, with completion occurring two months ahead of schedule.