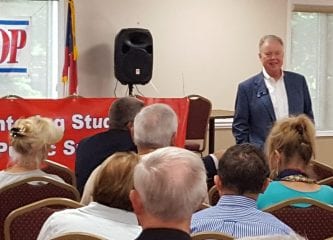 HIAWASSEE, Ga. – The Towns County Republican Party hosted two guest speakers Thursday, May 16, at their monthly meeting at the Towns County Civic Center in Hiawassee. Georgia State Senator John Wilkinson addressed the “Good, Bad, and Ugly of the 2019 Session” and Dr. Gerry Chotiner spoke on subject of political correctness, “To Be or Not to be PC.”

Flyer from the May GOP meeting

The senator praised the state’s balanced budget and AAA bond rating, noting that 90-percent of senior citizens pay no state income tax. Wilkinson informed that Georgia is considered the number one state to do business in the county, and relayed that he believes Governor Brian Kemp had “a great first session.” The state official expressed disappointment in the failure to pass the “recess bill” which would have mandated 30 minutes of recess each day for school children. Wilkinson said it was a good year for education, as teachers received pay raises, and 2,300 schools which took part in a study will each receive $30,000 to improve school safety. The senator spoke favorably on the “heartbeat bill” which bans abortion after six weeks of pregnancy. “Georgia need to be a state that stands for life,” Senator Wilkinson said.

Dr. Chotiner spoke on the history of political correctness, providing statistics from a 2015 study conducted by Yale University. According to Chotiner, 51 percent of students favored speech codes, and 33 percent could not identify the First Amendment which protects free speech.

Towns County Republican Party recently launched a website, and GOP Chair Betsy Young displayed it on a laptop computer near the refreshment table for attendees to view. Towns County GOP meets on the third Thursday of each month at 6 pm at the civic center on the courthouse campus.