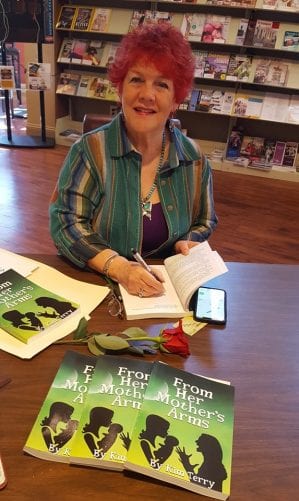 HIAWASSEE, Ga. – Towns County Library held a book signing Monday, May 13, for Kim Terry, the author of the debut novel, From Her Mother’s Arms. Terry explained that she began scripting the novel in 2009, sharing that the story is the first in a continued series.

“Mona Lisa, abandoned at birth and renamed ‘Rona’ by a couple claiming to be her birth parents,” the blurb on the book’s jacket reads. “When she turns seven, she finds out from the woman’s sister that the Fergusons have not only been lying to her but, also, that their sudden deaths have helped to close the ‘Case of the Missing Mona Lisa.’ When the aunt dies and leaves Rona alone, her death catapults the girl into the foster-care system until a soft-spoken man at a support group leads her to a place of peace and, quite possibly, reunion.

“Bo, older brother of Sybil Stevens, has remained his sister’s closest confidante throughout their lives. When ‘Sister’ turns up pregnant, he finds out that the baby’s father is none other than his high-school buddy, Damon, a rakish quarterback with a score to settle.

“Damon has caught his girlfriend with his arch nemesis, Jett Davis. When Prom Night rolls around, he invites Jett Davis’s innocent ex-girlfriend, Sybil, to Prom. Clueless about the ‘footprint’ he has left behind, he finds his memory drifting to one reckless night in 1950. When he flies in to attend the funeral of another friend from high-school, he crosses paths with a distraught green-eyed woman at a gas station…”

The scene takes place in the 1950s in Lamesa, Texas, when the teenaged girl becomes pregnant and is forced to give her child up for adoption. “The book tells the story from the baby’s point of view,” Terry said. “The story continues, but I felt this portion deserved a book of its own.” Terry’s sequel is expected to be released in late-2019 or early-2020, a murder mystery entitled, By Her Daughter’s Hands.

Kim Terry shared that she began writing poetry at a young age, then ventured on to suspense and mystery genres. “My mother was a writer so I guess you can say its in my DNA,” the author said with a smile. “My mother wrote poetry, camping articles, religious articles, and so forth.” Originally from Fort Worth, Texas, Terry and her husband, Jeff, now manage a second season at Appalachian Campground in Hiawassee.