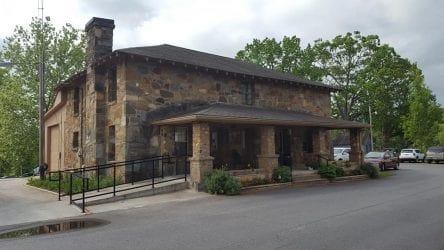 HIAWASSEE, Ga. – A good place to find Towns County Historical Society President Sandra Green is at her home away from home, the Old Rock Jail Museum, in Hiawassee. The historical site, which celebrated its grand opening last year, sits adjacent to the Towns County Courthouse. FYN visited the museum on Friday afternoon, as Ms. Green tended to the colorful blooms bordering the former detention center. A beloved project of Green’s, the historian was instrumental in the revitalization of the site. 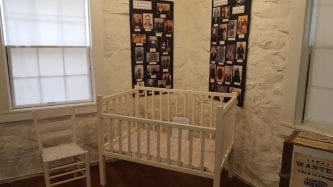 A 1938 crib is the newest addition to the museum

The Old Rock Jail served as the county jail from 1936 until the mid-1970s, prior to the construction of an updated detention center. The jail was renovated in 1980, and functioned as Hiawassee City Hall, as well as a voting precinct, before abandonment in favor of a modern facility. The building was listed on the National Register of Historic Places in 1985. The Towns County Historical Society gained possession of the site Jan. 27, 2017.

The Old Rock Jail musuem contains a variety of photographs and relics, preserved and donated by local families. The museum is open for tours Fridays and Saturdays, through October, from noon to 4 p.m. Admission is free, although donations are greatly appreciated. Vistors can roam what was once the living quarters of past Towns County sheriffs and their families before climbing a narrow set of stairs, leading to the barren cells above. The final sheriff to reside in the Old Rock Jail was Jay Vernon Chastain Sr. who was killed in the line of duty in late 1974.

Historian Green pointed out a new addition to the museum, a baby’s crib graciously donated by Maggie Oliver. Built around 1938 by Alvin Baxter “AB” Oliver for the first Oliver grandchild, the crib cradled four successive children. The last  occupant to slumber in the crib was Drew Oliver, a Hiawassee resident. The bed was moved into storage until it was rescued and refurbished by Maggie Oliver in 2019. 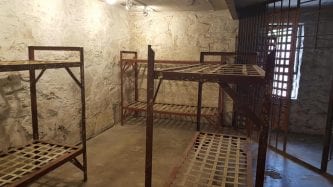 View of an upstairs cell

Green reminded of the historical society’s monthly meeting, scheduled for Monday, May 13, at the Towns County Civic Center. The presentation will focus on Native American artifacts uncovered in the area, specifically how the Brasstown Valley area could be affected by the construction of the Young Harris bypass. The meeting begins at 5:30 p.m. and is open to the public.