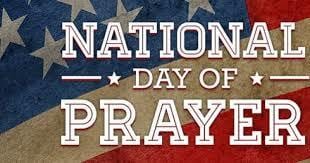 YOUNG HARRIS, Ga. – Towns County Recreation and Conference Center was the site of the National Day of Prayer on Thursday, May 2.

Towns County Commissioner Cliff Bradshaw spoke at the event, with the commissioner offering history prior to an invocation. The National Day of Prayer (NDP) was established as an annual event in 1952 by a joint resolution of the United States Congress and signed into law by President Harry S. Truman. The observance of the National Day of Prayer is founded on the constitutional rights of freedom of speech and freedom of religion and can be celebrated by all Americans. 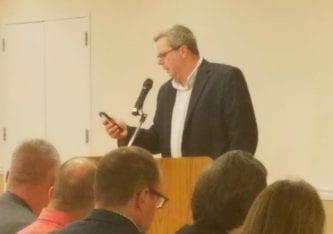 Days of prayer have been called for since 1775, when the Continental Congress designated a time for prayer in forming a new nation. In 1863, Abraham Lincoln called for such a day. Officially, the NDP was established as an annual event by an act of Congress in 1952 and was signed into law by President Truman. President Reagan amended the law in 1988, designating the first Thursday of May each year as the NDP.

The most visible gathering has been held historically at the nation’s Capitol in Washington, D.C. on the first Thursday of May. The executive, legislative and judicial branches of government are represented, as well as the military. In addition, Christian leaders address the current year’s theme and other areas of interest (i.e. education, youth, families, etc.). Every year, tens of thousands of events are held nationwide. Local volunteers hold a variety of activities ranging from prayer breakfasts, Bible reading marathons, concerts of prayer, rallies, church prayer vigils, student flagpole gatherings and observances held in sports stadiums.