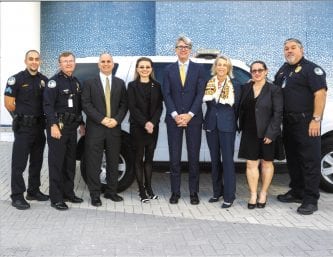 HIAWASSEE, Ga. – Sunny Isles Beach City Manager Christopher Russo and Deputy City Manager Stan Morris made the trip from South Florida to Hiawassee on March 14, 2019 to present Chief Paul Smith and Mayor Liz Ordiales with a donated police vehicle. The Ford Explorer, which is fully equipped with lights and siren, was delivered to Hiawassee by a Sunny Isles Beach PD officer who made the trip two days earlier. Mr. Russo had learned of the need for updated and additional vehicles from articles in a publication and from Russo’s retired Police Chief, Fred Maas, who now resides in Towns County. The rest was due to the benevolence of the City Commission of Sunny Isles Beach, under the direction and approval of Mayor Bud Scholl.

Mr. Russo and Chief Maas are firm believers in helping brother law enforcement agencies in today’s crime prevention and community policing endeavors. Similar assistance was given this past Christmas season with Hiawassee’s Shop with a Hero program. Chief Maas and Chief Smith have met several times to discuss the issues facing law enforcement in Towns County. “Police work is environmental to the area in many cases, but it is also fundamentally similar in all areas as well. Whether it be narcotics issues, domestic violence issues, the opioid crisis, or traffic issues, all agencies face similar challenges,” Maas said. “So, we surely want to share what we can to assist the Chief and officers in their day to day efforts.”

In addition to the vehicle, Sunny Isle Beach donated six Pro Laser III LIDAR (light detection and ranging) speed detection devices. “All of our vehicles are equipped with RADAR speed detection devices,” Chief Smith advised. “However, the Pro Laser III is a handheld LIDAR device which will allow us to more easily target problem speeding areas to address the concerns of the public. Since we now have one more LIDAR unit than we can use, we will pay it forward and donate the extra to another local department. We are incredibly grateful to the City of Sunny Isles Beach for their generous donations.” Smith also expressed his gratitude to the Towns County Sheriff’s Office, who donated a prisoner partition from their surplus equipment, to be installed in the new vehicle.

Sunny Isles Beach is an oceanside community located on the north end of Miami Beach, Florida. The city council is known for their outstanding support of their police department, and by their actions via the donation of equipment to Hiawassee PD, have clearly shown their support of law enforcement efforts beyond South Florida.