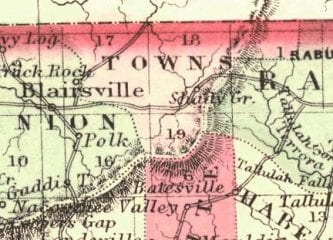 HIAWASSEE, Ga. – Towns County Historian Jerry Taylor shared an encore presentation on the mystery behind the unique names of area locations, entertaining a crowd of nearly a hundred at the historical society’s monthly meeting Feb. 11.

“Woven into the folklore of Towns County are colorful names of communities, creeks, waterfalls, roads, and country lanes. A search to find out who named these spots and why they chose the names reaches back into the dim and shawdowy yesterdays,” Taylor began. 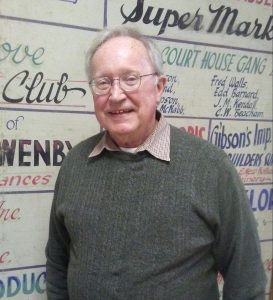 Dozens of locations such as Scataway, Shake Rag, and Bugsscuffle were featured and Taylor explained that the legends behind the chosen names had been passed down through generations.

It was said that Scataway Road is namesaked because the “king of moonshiners” resided there and would “scat-away” from federal revenuers as they made their unwelcomed approach. Likewise with Shake Rag Road, folklore has it that Appalachians would feverishly wave a rag outdoors to warn illicit moonshiners that the dreaded government was near. Another Shake Rag version claims that Civil War dodgers were alerted of encroaching Confererate officers by the shaking of rags, allowing them to lay low to avoid fighting in the bloody battle between the states. Bugscuffle Road was said to have been named after a resident once uttered, “I’m from a place so poor that even the bugs have to scuffle to make a living.”

Many other locations were simply christened after the surnames of early settlers.

Intriguingly, Hiawassee itself could have been known as Boston had the Cherokee translation for “meadow” not been adopted. “It’s in the courthouse minutes’ books,” Taylor chuckled. “They designated the county seat Boston for a few months, and then for awhile it was Watson’s Crossroads.” Hiawassee bore the title of Shady Grove for a short period of time as well.

An article on Taylor’s previous presentation on the history of local Cherokee names is available..

Towns County Historical Society meets on the second Monday of each month at 5:30 p.m. at 900 N. Main St. in Hiawassee, the site of the old recreation center. Grace Howard of Hamilton Gardens is scheduled to speak at the March 11 meeting.

Feature Image: A 1863 map of Towns County, Georgia, when Hiawassee was known as Shady Grove.