HIAWASSEE, Ga. – A traffic stop conducted by Hiawassee Police Department led to yet another drug arrest during the afternoon hours of Saturday, Dec. 8, near the intersection of Main Street and Bell Creek Road.

Amanda Aveline Wheeler, 39, of Hiawassee, was arrested and charged with the following offenses: 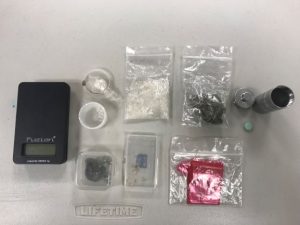 A probable cause search was conducted due to an odor of marijuana wafting from the the interior of the vehicle. According to the Hiawassee Police Department, Wheeler offered that a quantity of marijuana was, in fact, present within the glove box of the vehicle, prior to the execution of the search.

“I started the search by opening the glove compartment. Once open, I located a small plastic bag that contained a quantity of marijuana that had a total weight of less than one ounce,” the arresting officer wrote in a report requested and obtained by FYN, “I then continued the search and in the back seat, there was a bag that contained Ms. Wheeler’s personal items. Inside the bag, I located a small black case that contained two plastic bags with methamphetamine, a clear plastic case with methamphetamine, a set of digital scales, and a plastic bag with several empty red plastic bags.”

In addition, Wheeler allegedly possessed a loose benzodiazepine pill, and had an outstanding warrant from Clay County, North Carolina.

Wheeler was transported to the Towns County Detention Center, and faces criminal prosecution.

Wheeler is presumed innocent until proven guilty in a court of law.