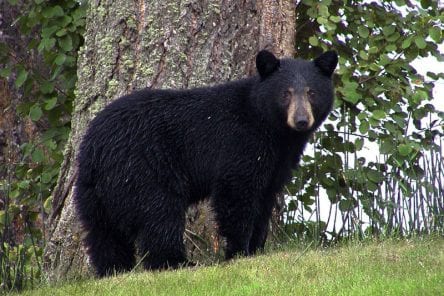 HIAWASSEE, Ga. – Most longtime residents are aware that the Appalachian mountains are home to abundant wildlife, including bears, but newcomers and visitors may not know what measures to take should an encounter with one occur.

In recent weeks, there have been reports of several black bear sightings in the area. A Ramey Mountain homeowner alerted FYN to frequent bear activity in her community, a few miles west of Hiawassee, in early November.

On Friday, Nov. 23, Hiawassee Police Department responded to a bear disturbance, frightening the massive creature out a resident’s yard with the blast of a patrol siren.  “Please be respectful of these animals and keep your distance,” Hiawassee Police Chief Paul Smith cautioned on social media, “While they typically avoid human contact, they will attack if they feel threatened.”

Yesterday, Nov. 25, a black bear was struck and killed on Highway 64, outside of Hayesville, NC, in the vicinity of Shooting Creek and Pounding Mill Road. 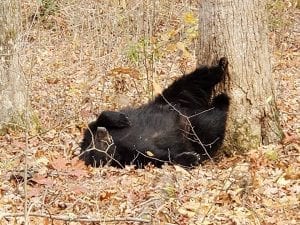 Bears become especially active as the summer season ends. During the fall months, bears eat and drink nearly nonstop, aiming to put on enough weight to prepare for a long winter’s nap, known as hibernation.

While it is advised to “play dead” when faced with the threat of a grizzly or brown bear, that is not the route to take with the black bear species. “Try to escape to a secure place such as a car or building. If escape is not possible, try to ﬁght back using any object available,” the National Park Service instructs, “Concentrate your kicks and blows on the bear’s face and muzzle.”

Fetch Your News is a hyper local news outlet, attracting more than 300,000 page views and 3.5 million impressions per month in Towns, Dawson, Lumpkin, White, Fannin, Gilmer, Pickens, Union, and Murray counties, as well as Clay and Cherokee County, N.C. – FYNTV attracts approximately 15,000 viewers per week and reaches between 15,000 to 60,000 per week on our Facebook page.