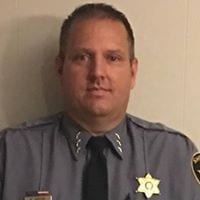 HAYESVILLE, NC – Clay County elected Bobby Deese to serve as their future sheriff on Nov. 6, with Deese garnering 56.6 percent of the votes. Deese, the successor to retiring, two-term Sheriff Vic Davis, states that he intends to meet with employees and the Clay County Board of Commissioners in the immediate future in order to discuss relevant matters.

“I would like to thank everyone for the overwhelming support I have received during this election,” Deese expressed on election night, “It’s been a long hard process but the election is now over and it’s time to look toward the future. As your Sheriff, I will work for all the citizens of Clay County and do everything possible to give you a Sheriff’s Office to be proud of. Thank you to Steve Byers for the professionalism and integrity of running a clean campaign. We need more of that in today’s politics. Thank you again. I look forward to the next four years.”

While campaigning, Deese avowed to operate a visible, available, professional , and accountable sheriff’s office. Additionally, Deese stated that he intends to “relentlessly pursue those who are supplying our community with drugs.”