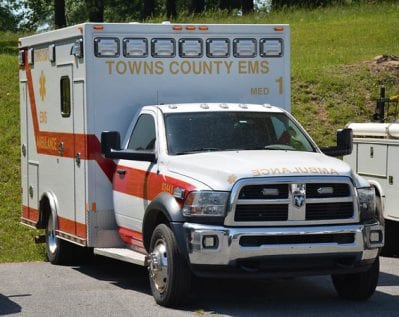 HIAWASSEE, Ga. – Towns County opened enveloped bids on the purchase of a modernized ambulance module for Emergency Medical Services (EMS) providers, receiving two proposals from out-of-state companies. Towns County Paramedic Jim Shirley spoke on the issue Tuesday, Oct. 16, stating that the purchase will ultimately save taxpayers hundreds of thousands of dollars over time. According to Shirley, the module is expected to function for a lifespan of 25 to 30 years.

Shirley explained that the current module, which is the ambulance area where the patients are transported, has experienced numerous issues, such as leaking and electrical difficulties, with remounts necessary on a frequent basis.

While the first bid, sent from a company located in Arkansas, did not include an actual quote, Towns County plans to contact the company to request a figure. The second bid, offered from a company based in Houston, TX, quoted slightly above $138,000 as the cost for the module.

The updated module will carry twice the capacity than the current , necessary in the event of a multi-casualty accident, and will be constructed of steel. Shirley explained that the module in current operation is contructed of wood. The module will feature a generator and bright LED lighting, allowing medics to function more efficiently in dimly-lit emergency situations.

The cab and chassis of the ambulance will be purchased through Jacky Jones dealership, an automotive company from where Towns County currently acquires government vehicles. The process of the ambulance becoming operational is expected to take approximately nine months.

While Shirley acknowledged that Towns County Commissioner Cliff Bradshaw is ultra-conservative in spending taxpayer funds, the paramedic praised the commissioner’s decision to purchase the upgraded ambulance. “I’m thankful the commissioner looks to the future, and not behind us,” Shirley said.