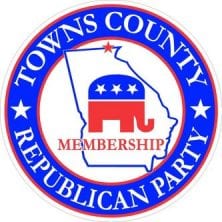 HIAWASSEE, Ga. – As the November General Election draws near, Towns County Republican Party has planned a GOTV (“Get out the Vote”) event in an effort to encourage voter participation at the local polls. The rally will be held on Thursday, Oct. 18, at 6 p.m. at the Towns County Civic Center, located adjacent to the Towns County Courthouse. 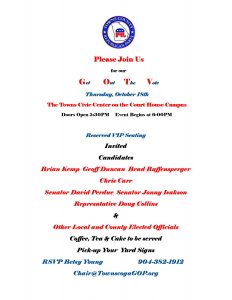 Several politicial figures, including State Senator John Wilkinson, State Senator Steve Gooch, and State Representative Matt Gurtler, are scheduled to attend. Others, such as Congressman Doug Collins, are slated to appear via Skype. Gubernatorial candidate Brian Kemp, Secretary of State candidate Brad Raffensperger, and Attorney General incumbent Chris Carr will be represented by surrogate or video. Additional dignitaries and candidates have been invited, and the list continues to grow with each passing day.

Summer Rahn is scheduled to perform the National Anthem, with local Boy Scouts leading the recitement of the Pledge of Allegiance at the commencement of the event. Cake and coffee will be served once the rally concludes with attendees singing “God Bless America.”

Yard signs in support of Republican candidates will be available.