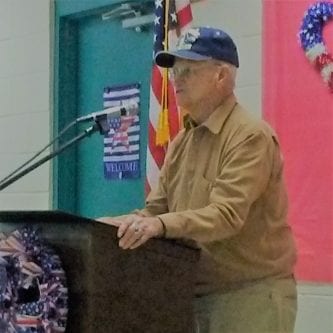 Phillips – the daughter of a veteran, and the widow of a World War 2 United States Army Staff Sergeant – recalled a conversation with her late husband before the program began. “Richie knew how much I loved history, and one day he made a point of reminding me of how different our history would be without our veterans. He said, ‘Betty, would you have the freedom to preserve history without the veterans?’ His words inspired me,” Phillips said with a smile.

The room in the former recreation center on Main Street, which now serves as a meeting hall for the historical society, quickly filled with veterans and supporters on Saturday morning at 11:00 a.m. Historical Society President Sandra Green opened the ceremony, acknowledging the dedicated effort Phillips applied to the project. The Pledge of Allegiance was followed by the National Anthem, sung by Karli Cheeks, and an invocation was offered by Doug Nicholson.

“I am truly blessed and honored to be standing up here because I don’t feel worthy of it, necessarily, because we owe it to those that have served,” Phillips emoted, “Either they were drafted, or they were willing to go and volunteer. We would not have a society like we have today if they had not sacrificed. Now, some people paid the ultimate price, and in Towns County, we have one of the nicest veterans’ parks that you can find anywhere. It’s in a beautiful location. It overlooks Lake Chatuge and the mountains, and most of all, the names of the veterans go on that wall. The other day, I started counting the names. There are over 1300 names on that wall. Now, the ones who paid the ultimate price, they have their own monument, their picture and their plaque.” Phillips noted that in World War 1, there were eight veterans who sacrified their lives for the sake of American freedom, three of which were Phillips’ relatives. During World War 2, thirteen service members paid the ultimate price. The veterans’ memorial is located in front of Towns County School on Highway 76 East. 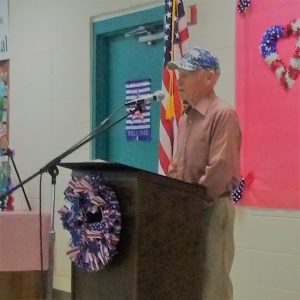 Lewis, reminised on his childhood, and his love for aeronatics; an appreciation which led to serving as a naval mechanic during the second World War. Lewis reenlisted in 1950, and served in the United States Air Force during the Korean War. Lewis listed serving under four Commanders-in-Chiefs: Presidents Roosevelt, Truman, Eisenhower, and Nixon. “If the current Commander-in-Chief asked me to join the fight, I’d carry it to the gates of hell for him,” Lewis asserted.

A decorated table filled with photographs of local veterans lined a wall, and a touching video clip of an interview of local World War 2 veteran Bud Johnson, 95, who attended Saturday’s ceremony, at the late Governor Zell Miller’s recent memorial service in Young Harris, was shown on a projection screen.

Members of Friendship Baptist Church presented certificates of recognition to veterans of different eras, and ensured that the crowd received a Chick-Fil-A sandwich, chips, cookies, and a soft drink at the conclusion of the program.

Towns County Historical Society expressed appreciation to its members, and to Alpha Delta Kappa Sorority, for helping to make the hertiage program possible.