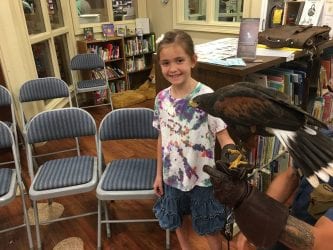 HIAWASSEE, Ga. – Falconer Buster Brown and his birds of prey visited the Towns County Library on the morning of Thursday. July 12. Brown, a former four-decade high school teacher and coach, holds the title of Master Class Falconer, and brought his expertise to the “Libraries Rock” Summer Program. The room overflowed with curious children, some carted by parents, and others by bus from the Towns County Child Development Center.

The presentation featured explanations of the characteristics of several live birds, and a short film explaining the raptors’ hunting techniques. The class concluded with an opportunity for participants to pose for a photograph with some of the milder-tempered winged creatures. 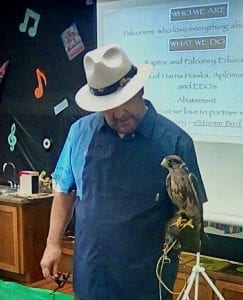 Buster Brown and his bird of prey

Falconer Damon Lusky, owner of Alfa-Knife, accompanied Brown during Thursday’s class. Lusky patiently answered the children’s questions, and displayed a pygmy owl at the beginning of the presentation.

Before the class began, Brown told FetchYourNews that the most common owls found in North Georgia are Barred Owls and Great Horned Owls. “Barred owls, not barn owls,” Brown clarified.

Additional information on Georgia Mountain Falconry can be found at www.georgiamountainfalconry.com