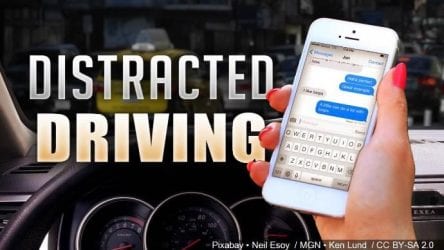 HIAWASSEE, Ga. – The Hands-Free Georgia Act takes effect July 1, and local law enforcement plans to uphold the newly-enacted state mandate. The new law strictly prohibits drivers from holding a cellular phone or stand-alone electronic device in their hands, or touching any part of their body, while operating a vehicle on Georgia roadways. Motorists will not be permitted to write, read, or send text messages nor emails, use social media, or otherwise access internet data. Drivers will be allowed use of GPS and navigational devices, however, via hands-free methods. While motorists will still be permitted to stream music through apps, the activation of such devices, changing of songs, or streaming of any type of video is prohibited. In addition, recording or broadcasting videos also constitutes a violation of law. Mobile devices may be used in lawfully parked vehicles which does not include traffic signals or stop signs.

“Hiawassee Police Department will certainly be enforcing the hands-free law,” Hiawassee Police Chief Paul Smith told FetchYourNews, “It’s definitely an issue we’ve seen, and it’s a growing issue that we’ve been looking at.” Smith explained that the penalty for first-time citations includes a $50 fine, a one-point penalty against the driver’s license, and states that the purchase of a hands-free device, such as a Bluetooth device or a stationary mount for electronics, prior to an appearance in court, will allow a defendant to enter a not guilty plea. Subsequent violations carry stiffer penalties.

“It’s becoming a habit we don’t think twice about since we have been talking on our phones while driving for more than three decades, and it is going to take time for all of us to stop automatically reaching for the phone when it rings,” Governor’s Office of Highway Safety Communication Director Robert Hydrick said, “If you want to talk on your phone or use GPS while driving, now is the time to implement those measures so hands-free will become the instinctive thing to do.”

Two-year studies revealed a 16 percent decrease in traffic fatalities within the 15 states that have implemented similar hands-free driving laws.

Additional information on the Hands-Free Georgia Act can be found at www.headsupgeorgia.com