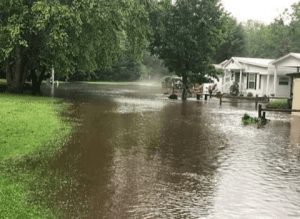 “The water was waist high in some areas, and I am 6 foot 3. I’ve never seen water run so fast,” Copeland said. “We cut off power as a safety precaution, and evacuated between ten to a dozen people.” Copeland said some residents were walked out while others were evacuated via a county vehicle. Approximately 30 residents were sheltered at Macedonia Baptist Church and Towns County Recreation Center overnight. Electricity was restored to the area at approximately 12:45 p.m. Wednesday, May 30.

Georgia Department of Transportation (DOT) has reported that Highway 75 south, north of Helen, between Robertstown and Unicoi Gap, is currently closed to traffic due to erosion from the recent rainfall.  Motorists are being diverted to a detoured route while road crews repair the damage.

Abundant moisture will remain across the area today with periods of showers and thunderstorms. Additional rainfall of one to 1.5 inches is expected, with higher amounts in localized areas. Some of these amounts could fall within a short period of time. Creek and river levels are already above average, and it will not take much additional rainfall to cause levels to rise above bank height. High waters may not recede until well after the rain has ended. A flood watch remains in effect until further notice.