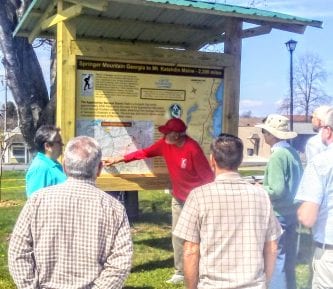 HIAWASSEE, Ga. – Hiawassee unveiled an Appalachian Trail kiosk on the towns’s square Sunday, March 18, 2018. The new addition was constructed to educate visitors of the close proximity of the internationally famed trail, and to welcome hikers to the area. The city of Hiawassee received a $1,200 grant to erect the kiosk.

“The purpose of this is for the people who visit our town,” Hiawassee Councilwoman Anne Mitchell explained. “We get a lot of hikers through here every year. We want them to know how close they are to this national treasure we call the Appalachian Trail.”

Hiawassee is the first official town that the hikers reach when traveling north on the Appalachian Trail, or the last town on the long journey south. The Appalachian Trail extends through 14 states, from Springer Mountain in Georgia to Mount Katahdin in Maine. An estimated 2 to 3 million visitors walk portions of the trail each year, including a few hundred who complete the entire 2,190 mile trek. Hikers often exit the trail to venture into Hiawassee at Dick’s Creek Gap, located next to Highway 76 in the eastern portion of Towns County. While some hikers opt to walk into town, others take advantage of a shuttle service provided by the Top of Georgia Hostel.

“We are extremely proud to be an Appalachian Trail Community,” Hiawassee Mayor Liz Ordiales told those who attended the small ceremony, adding that she hopes hikers will enjoy Hiawassee enough to one day return, buy a home, and retire.

“We have such a beautiful area to live and I want to share it,” Towns County Commissioner Cliff Bradshaw said during the event. “I’m so excited to work with Liz and the city of Hiawassee as the county commissioner because we are doing so many positive things, and this is one of them.”

Steverson Moffat, the acting Blue Ridge district ranger of the U.S. Forest Service, relayed that his agency works closely with the Appalachian Trail clubs. “Our goal is the same, to make the trail a positive experience for the public to get out and enjoy it,” Moffat said.

Adventurers from all walks of life, both U.S. citizens and visitors from abroad, set out to experience the rugged trail on any given day. Spring and summer seasons are the most popular with “thru-hikers”, the name given to those who hope to conquer the two thousand mile journey. From start to finish, it is said to take the typical hiker a minimum of five to six months to complete the entire trail. 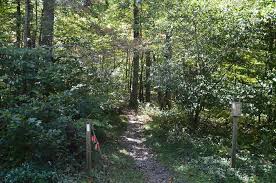 The Appalachian Trail was proposed in 1921 by Benton MacKaye as “a long trail or footpath along the full length of the Appalachian mountain range as a sort of retreat or refuge from a civilization which was becoming too mechanized.”

The Appalachian Trail Committee was formed the following year in Washington D.C. with the first section of the trail opening in 1923 at Pallisades Park in New York. The trail was constructed and continues to be maintained by devoted volunteers from each of the 14 states through which it travels.

Within an informative booklet provided by the Appalachian Trail Community, there reads an eloquent quote attributed to a man named Harold Allen, an early trail volunteer.

“Remote for detachment, narrow for chosen company, winding for leisure, lonely for contemplation, the Trail leads not merely north or south, but upward to the body, mind, and soul of man.”

The Appalachian Trail is indeed a treasure, and Hiawassee is pleased to be linked to its well-beaten path.