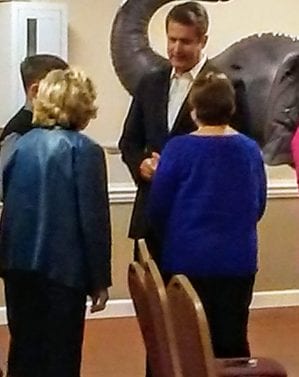 HIAWASSEE, Ga. – Towns County GOP welcomed state senator and gubernatorial candidate, Michael Williams, to their monthly meeting on the evening of Thursday, March, 15, 2018. Senator Williams took office in 2014 after winning the election with 66 percent of the vote against a long-time incumbent. Williams opened his address by recounting a number of hardships he encountered and overcame throughout his life, including the suicide of his Vietnam veteran father when Williams was 14 years old, literal and metaphorical hurdles he faced while competing on his school’s track team, and a trying battle against the Internal Revenue Service (IRS), which he won.

The candidate for Georgia governor stated that he is the only contender who supported President Donald Trump during the election, claiming his opponents feared the donor base of the establishment. Williams avows to continuing fighting said establishment and says the self-funding of the majority of his campaign is just the beginning of his goals.

During his time in office, Senator Williams has introduced legislation into the State Senate to freeze state tuition rates for college students. He plans to introduce pay raises for law enforcement without increasing taxes and said he will continue to fight to protect Stone Mountain and other Confederate monuments from what he refers to as “radical Democrats.”

Michael Williams states he will outlaw sanctuary cities and begin deportations. Williams says he is the only candidate with a plan to identify and begin the deportation process through 287(g).

“Every murder, every rape, and every crime committed by an illegal against an American citizen is enabled by a Democrat,” Senator Williams asserted. “This may seem harsh, but the facts are obvious. Democrats fight against the border wall and other means to keep illegals out of our country. They block efforts to keep our citizens safe, making them complicit in each crime committed by an illegal. It’s that simple.”

The conservative candidate said he is adamantly pro-life and an advocate of religious freedom legislation. In addition, the senator affirmed he is a proponent of the second amendment and constitutional carry.

When asked what sets the candidate for governor apart from the rest, Michael Williams said he is not funded by lobbyists, special interest groups, or corporations. “All of the other candidates, from Casey Cagle to Hunter Hill, get their money from those groups. I’m the only one that is self-funding, as well as relying upon hardworking Georgians, which allows me to stand up for the hardworking people of Georgia,” Williams stated.