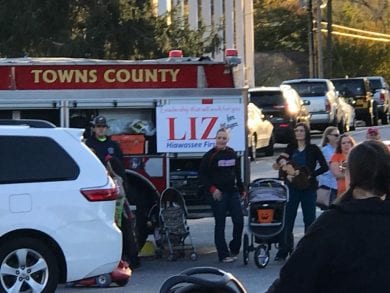 HIAWASSEE, GA – In a live interview conducted by Fetch Your News (FYN) CEO Brian Pritchard with Hiawassee Mayoral candidate Liz Ordiales on the morning of Nov. 3, 2017, Mr. Pritchard questioned Ms. Ordiales’s decision to place her campaign sign on a Towns County Fire and Rescue truck during the City’s annual Halloween on the Square festivities on Oct. 31.

“Why did you put your campaign banner on the side of that firetruck? That is a violation of State,” Pritchard asked as the interview concluded. “Why did you do that?” 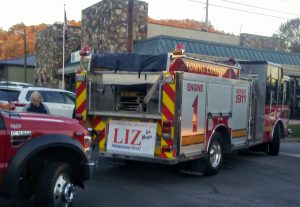 Candidate Ordiales responded she did not realize it was an ethics violation, stating she is connected to the Fire Corps and has raised $250,000 for the nonprofit organization, while making mention of Councilman Jay Chastain Jr.’s photographed endorsement of Liz Ordiales’s opponent, Barry Keith Dearing, while wearing an EMS uniform.

Towns County Sole Commissioner Cliff Bradshaw, who tended to a booth for trick-or-treaters at the popular Halloween event, promptly asked Candidate Ordiales to remove the sign after it was brought to his attention.

“Towns County does not endorse candidates,” Commissioner Bradshaw said. “I’ve made that clear to the heads of all departments.”

Fetch Your News headquarters received a photo complaint of the campaign banner from an attendee soon after it was affixed to the firetruck.

“The minute I was called and told there might be a problem, did I take it down? Immediately it was taken down,” Ms. Ordiales said in the interview.

Candidate Ordiales removed the banner from the side of Engine 1, placing it on the bumper of the county emergency vehicle, out of the Commissioner’s line of sight, for a short period of time before being asked to place it in her vehicle by current Towns County Fire Corps President Colleen Gibson.

FYN CEO Brian Pritchard also questioned Candidate Ordiales’ usage of the City Of Hiawassee logo on campaign correspondence. Ordiales replied it is legal, that the City logo is not trademarked.

Incumbent Councilman Chastain has since responded to Candidate Ordiales comments on the endorsement photograph published by Fetch Your News. 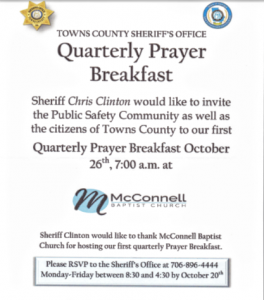 “I didn’t think anything about it,” Councilman Chastain said. “I was invited to the Sheriff’s prayer breakfast, as were all first responders, and I stopped by before heading to work in North Carolina. Barry was there, [FYN’s reporter] was there, and the picture was snapped. I personally supported Barry before the endorsement was publicized.”

Councilman Chastain did not address the group during his visit nor was his endorsement announced at the event.

The image in question has since been replaced on the original article by request from the Councilman.

Concerns related to Councilman Chastain’s uniform were not brought to FYN’s attention prior to community complaints of campaign ethic violations committed by Candidate Ordiales.

Ms. Ordiales was asked to remove a line of campaign signs from sidewalk flower pots located in front of The Mall on Main Thursday, Oct. 2, via a business owner who wishes to remain anonymous in the event Ordiales is elected.

An article related to the Halloween campaign controversy was recently published by FYN prior to the journalist’s decision to retract it in order to allow the list of allegations raised by former Towns County Fire Corps Vice President Ken Bryant while Liz Ordiales served as the nonprofit’s president to stand alone.

Mr. Bryant, a former federal agent and current fraud investigator, was offered an opportunity by FYN CEO Brian Pritchard to submit a rebuttal for publication as an opinion piece. Reference to the allegations are addressed in the FYNTV.com interview with Ms. Ordiales.

Continue to follow Fetch Your News for additional coverage of the Hiawassee City Council election.