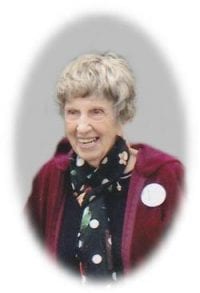 Margit Tyra Stortz, 100, of Hiawassee GA passed September 8th 2017 at Brasstown Manor. She was born in Sundsvall Sweden August 26th 1917. She came to the US when she was 7. Her name appears at Ellis Island along with her mother, father, and sister Ruthie. She lived in Chicago IL from 1923-1974. She was married to Ralph Stortz for 54 years who passed away at the age of 79 in 1991.

She is survived by 2 sons David & Paul, and her daughter Judy Kirk. She lost her son Les in 2003. She had 12 grandchildren, 19 great grandchildren, and 7 great-great grandchildren. She worked at JC Penny for 35 years, was a volunteer at the hospital in FL for 25 years and was always active in politics and while in Chicago worked at Republican election headquarters as a judge. She was also active in her church and community. She remarried in 2002 to George Fiebe and was married for 8 years until his passing in 2010. She moved to Hiawassee GA to be closer to her daughter and son-in-law in Hayesville. She loved life to the fullest, loved all, and was loved by all.

In lieu of flowers donations can be made to All Saints Luther Church, Regency Hospice, The Salvation Army, or your local school.

Mountain View Funeral Home of Blairsville is in charge of the arrangements. You may sign the family guest book and send condolences on line at www.mountainviewfuneralhome.com