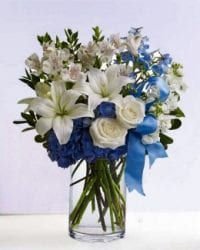 Banister Funeral Home of Hiawassee, Georgia in charge of arrangements.