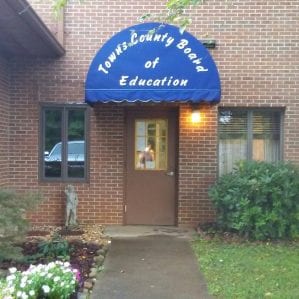 There was prior discussion to release students at noon, but the Board agreed a full day is in the best interest of students and staff. It will be treated as a weather event.

The school’s parking lot will be available for parking to compensate for anticipated overflow at the Georgia Mountain Fairgrounds. A nominal parking fee will be implemented although the amount has yet to be determined.

The possibility of allowing camping on school grounds was previously considered. However, the liability was determined high risk. Concerns of alcohol, potential illicit activity, and damage to school grounds were cited.

In other news, Dr. Berrong said the first day of school, which began on August 3, ran “unbelievably smooth…The smoothest first day I can remember.”

Dr. Berrong also noted Towns County’s milestone test scores are currently 76% while the state average is 59% and 12 out of 17 objectives have been met. Dr. Berrong included high school scores are a “vast improvement” in comparison to the previous year.

21st Century Director, Jenny Stowers, presented an evaluation report on the after school program which shed light on a 96% satisfaction rate among parents of the students involved.

A 21st Century Grant Award in the amount of $310,255 was accepted by Board members for funding.

The 21st Century program is in its tenth year of operation and offered to students at no charge. This year’s program begins on August 14 and 220 students applied for the 200 available spots which has resulted in a waiting list for acceptance.

Recommendations on the following positions were unanimously approved by the Board:

The contract between Towns County School District and Towns County Sheriff’s Office will continue for sporting events at an agreed rate of $75.00 per game.

The Board’s session closed with discussion of a meeting which took place between Board of Education members and former Hiawassee Mayor Pro Tem, Liz Ordiales. Ordiales suggested a work based plan which would encourage students to learn skills relevant to the county’s business needs.

The Board voiced concern most students likely strive for higher aspirations than local employment opportunities provide, but also noted the potential for advancement through entry level positions. It wasn’t clear whether a program of this nature will be adopted.

Liz Ordiales, who was not present at the meeting, stepped down from the City Council on August 4 in order to run for Mayor in the November election.

The Board of Education will meet for their regular monthly session on Monday, August 14, at Towns County Middle School.