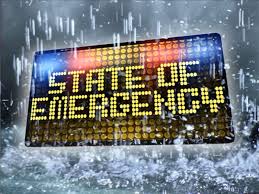 “In order to prepare for the second round of storms, I’ve directed state agency heads to encourage employees to telecommute where appropriate,” Deal said. “Capitol Hill agencies and other state government offices will close at 12:00 p.m. on Friday to allow time for roads and bridges to be treated in advance of possible freezing rain and snow. I encourage municipal governments and private businesses in metro Atlanta and other affected areas to follow suit. I will continue to monitor those counties under a winter storm advisory and revise my executive order as needed.”