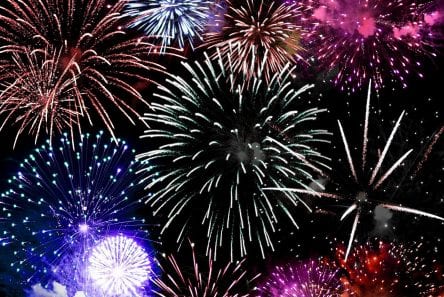 HIAWASSEE, Ga. – Independence Day is quickly approaching, and Towns County will feature several events to celebrate America’s freedom. The Lake Chatuge Boat Parade is scheduled to launch the festivities, Thursday, July 4. “Boaters line up in the Sunset Bay Cove behind Aqua Tiki, the Grand Marshal, for the parade beginning at 10:30 am,” Towns County Chamber of Commerce said. “No wake, and boats must fly a U.S. flag. Additional patriotic decorations are encouraged. Boats must have a number issued to be considered for judging. A $50 prize will be awarded for most creatively decorated boat, and also for the most red, white and blue. Boats will parade past the Georgia Mountain Fairgrounds, under Anderson Bridge, and past the Hiawassee Beach area before disbanding. Judges will be positioned at the Georgia Mountain Fairgrounds.” Winners will be announced July 4 at 2 pm on the “Towns County and Lake Chatuge Chamber of Commerce” Facebook page.

Participating boaters must pre-register, prior to 4 pm on July 3, with the Towns County Chamber of Commerce at 706-896-4966 or crystal.wagner@brmemc.net 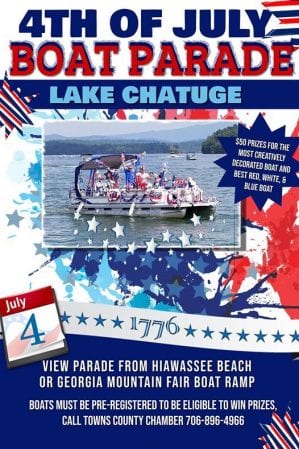 Music lovers are invited to attend venues in the area, including Sand Bar and Grille, located west of Hiawassee city limits on State Route 76. Sand Bar and Grille will host a July 4th cornhole tournament at 11 am, followed by the bands Whiskey, Stills & Mash and Slickfoot, beginning at 7 pm. A fireworks display will light up the night’s sky at 9:30 pm, and the staff promises that the show will be “bigger and better than ever this year.”
Towns County’s very own sheriff will provide entertainment, via the Chris Clinton Band, at the Freedom Explosion celebration at Georgia Mountain Fairgrounds from 6-9 pm, prior to an extended fireworks display at 9:45 pm. “We will be doing a lot of new original songs for the first time, as well as covering some of my favorite songwriters,” Clinton wrote on social media. “Yeah, you probably won’t know many of them, but you can say you heard it first. Hope to see you there!” North Mount Zion Church will provide games and activities for children at the fairgrounds, and food and drinks will be available for sale in front of the fair office. 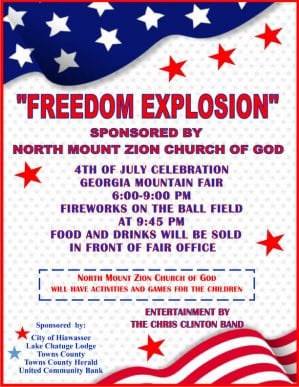 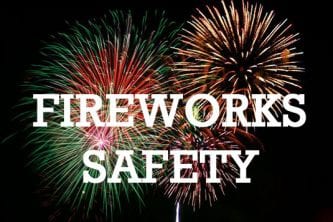 HIAWASSEE, Ga. – Fireworks can be fun and exciting, but they can also be dangerous if the proper safety precautions are not taken. Agent Dianne Williams of Danny Burch Insurance Agency is teaming up with the Georgia Arson Control Board to remind the citizens of Towns County to make safety a main priority if they choose to handle legal fireworks.

According to Williams, “By following a standard set of firework guidelines, our community can greatly reduce the chance of injury.”

Use Only Legal Products

Look for Labels and Read the Instructions

The Georgia Arson Control Program, Inc. (GAC) was formed in January of 1979 by property and casualty insurers writing business in Georgia.  GAC, with the cooperation of the Commissioner, Georgia Department of Insurance and Safety Fire, and state/local law enforcement agencies, established an ARSON HOTLINE 1-800-282-5804. A reward fund of up to $10,000 was initiated from which monetary rewards are given to individuals who come forward with information that results in the arrest and conviction of those responsible for arson and/or fraud.

These fireworks are legal to purchase and use across Georgia, according to a state website: